The true English Elm is the Wych Elm (Ulmus glabra)  (read English Elm) which survives in the west and north of England as well as Scotland and Wales, the Wych Elm is better able to survive the ‘Dutch’ Elm disease due to its many branched stems and wider water transport channels which are blocked by the fungus in the ‘English Elm’. The Elm cannot transport water to the foliage so the Tree loses the branches and foliage which it needs to gather sunlight for its energy the Elm then dies back to where water can reach, but a subsequent attack the following year debilitates the Tree and the die back continues, normally if left alone the Elm Tree will usually sprout shoots from its base or roots, survive and re-grow, it is only human intervention that cuts down the Tree and poisons the stump to prevent suckers growing that usually kills the Elm.

The story of Dutch Elm disease is a lesson for all to understand. There is a little flying beetle Scolytus multistriatus and the larger Elm beetle Scolytus scolytus that are native to Europe, these beetles had evolved with European Elm trees, and had no reputation in causing them any permanent harm at all. The Elm was interwoven into the beetle’s life cycle to such an extent that the beetle would become extinct if there were no elms.  The female beetle would search out Elm trees in the spring and land in the upper branches where the twiggy growth produced the Elm flowers. Elm flowers would normally only flower when the Elm Tree was approx. 20ft tall or taller, the flowers are pretty little dark pink or purple flowers. 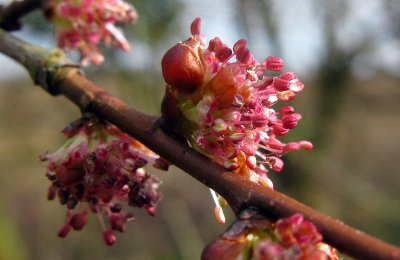 But the Elm tree would store growth hormones in the ‘v’ or crotch of the twigs, these growth hormones would trigger growth in the spring for the foliage and flowers. The female beetle will seek out the hormones and by biting into the bark of the twig’s crotch it will eat the hormone which it needed before it could become sexually active and start to produce eggs, once the eggs were mature the female beetle will seek out a mate to become impregnated.

The beetle would then return to lay its eggs on the Elm tree, it has strong mandibles and it would chew a little hole in which it could then enter under the bark and chew out a brooding chamber where it could lay it’s eggs. The beetle would also carry the spores for a fungus Ophiostoma ulmi which it’s lavae once hatched would feed on before maturing. The fact that the Beetles carry the fungus is regarded as a ‘vector’ disease, ie: the disease is spread by a vector (the beetle) Malaria is also carried by a vector, the Mosquito.

The beetle even with its strong jaws can only chew it way through the thinner younger bark of the tree, which in general kept it to the upper branches of the mature Elm. The fungus would grow in the water capillaries of the Tree (where the upward water would travel from the roots to the foliage).  as you can see from the photos below, the pattern of the Beatle lavae once hatched they would set off eating a track through the Phloem of the wood (phloem is the part of the wood which stores sugars and where the cells differentiate into cells for the inner wood and the protective epidermis of the bark)

The tree is also not helpless, as Trees have a strategy of defence against invasion by fungi and bacteria, this strategy is called ‘compartmentalisation’ this is where the tree will seal of sections of its self when it detects an invasion or pathogen attack. So it would be normal practise for the tree to either compartmentalise off a branch or a section of trunk if it detects a stressful invasion.

The European species of Ophiostoma ulmi fungus grows in the water transport capillaries of the tree but not enough to impede or block the upward movement of water in the trunk, although in the smaller capillaries of branches it could cause die back by blocking the smaller water transport capillaries, the tree would ‘compartmentalise of the branch, or part of the branch. This would cause a characteristic ‘crook’ as the twigs would bend into a ‘sheperds crook’ as it dried out from lack of moisture. This was a normal evolved practise between the Beetle, the Fungus and the Elm tree. It has been suggested that the ‘wild’ Elm Ulmus glabra or Wych Elm evolved its multi stem growth to further protect itself against this fungus which it had evolved in the environment with. (as against the single stem southern hybridised Elm which suffers so much damage from the species of fungus Ophiostoma.)

In regards the Dutch Elm disease, (DED) what botanical scientists believe had happened was that European Elm logs had been shipped to the United States in the 18th century, where they would have been used as water pipes this is one of the ancient uses of Elm wood, was to use the wood as water pipes, (also shipbuilding, bridge piles, anywhere long term contact with water was required).  The Elm wood has a natural defence built into the wood against rot, or fungus breakdown, this was due to its evolutionary life with the beetle and the beetle fungus, the tree had evolved a strong natural defence against fungus attack in the wood itself, this natural anti-fungicidal element was within the wood and made it perfect for the use of water pipes. (there have been many occasions when Elm pipes have been dug up to be replaced by iron ones in the 19th century and these wooden pipes were known to be several hundred years old)

The Elm trunks carried European Elm beetles to the North American Continent, where it is believed they proliferated. At some stage many years (believed to be in the 1920’s) later American Elm timber was shipped to Holland for use (clogs etc.) only the timber carried with it the North American fungus Ophiostoma novo-ulmi which fulfilled a similar role in the States, along with broods of returning European beetles. But this American O. novo-ulmi fungus is more aggressive and quicker growing then the European species and once the beetles carried the spores out into the wild and started breeding on European Elms, the quicker growing fungus would block up the ‘smaller’ water capillaries of the European Elm further down the crown during its growth cycle.

In the Americas the American Elm has evolved larger water capillaries to accommodate the more robust fungus growth, and most Elm tree deaths are caused by root transmission, but with a complex interplay between infection in the tree crown from the European beetle and the larger American beetle infecting the larger branches lower down in the crown or even trunk the Elm tree suffers a debilitating effect which is the prime reason for its demise.

But in Europe, the Elms would suffer from water starvation to the leaves, causing crown die back. The Elm tree would attempt to compartmentalise off the relevant branch to prevent the fungus from growing into the rest of the tree, also the new faster growing fungus was compromising larger branches and the tree trunks water transport capillaries, which the Elm could not compartmentalise off without sealing its own demise. The fungus goes dormant in winter when the tree it-self goes dormant and no longer provides moisture for the O. novo-ulmi fungus to grow.

The compartmentalised branch would die and fall in the following years causing damage to property and people, as the trees were extensively used to line roads and avenues. So the treatment when an Elm tree got the newly labelled Dutch Elm disease, is to cut down the tree to prevent food and breeding place for the beetle and to help prevent damage from falling branch’s, there is also a potential for the hybrid Elms used for street trees to pass the fungus to the next tree in the street through underground root ‘melding’ or natural root grafting.

In the wild, trees have a more balanced and symbiotic relationship with various fungi that provide additional protection for trees from infectous diseases, but in the sterile soils of street trees, this interplay between fungi symbiosis is greatly reduced. This is expressed when an Elm tree is allowed to develop from an Elm hedge, eventually as the Elm tree reaches the height for flowing and is then infected by the beetle vector with the fungus  although the tree will die back, the surrouding hedge is unlikely and rarely affected by the fungus through root grafting transmission.

Many Elm hedges survive in the UK precisely because they are left as hedges, as the Elm only begins to flower when they reach a certain height (approx. 15 – 20ft) there is no large concentrations of hormones stored in the ‘crotch’ of the twigs to attract the female beetles, and without the beetle which carries the Amercian fungus Ophiostoma novo-ulmi, the Elm hedges remain untouched. When a section of the hedge is allowed to grow tall into a tree, once it begins to flower it always attract one of the Elm beetles and soon succumbs to the O. novo-ulmi fungus.

In the photos below you can see the brooding chamber of the European beetle Scolytus multistriatus and the larger Scolytus scolytus. The brooding chamber would be the centre large tube shape in the perpendicular in relation to the trees trunk, (the american beetle places its brooding chamber in a horizontal position in relation to the tree trunk) and you can see in the photo, the beetle lavae would hatch and then eat themselves a tunnel in the Phloam, and you can see the little tunnels get bigger as the lavae get bigger, the lavae would pupate and metamorphosis into beatles where they would return to the brooding chamber and exit through the bark from the original hole their mother made, depending on the season, the beetles may over winter in the tree before the warmer weather of the spring. 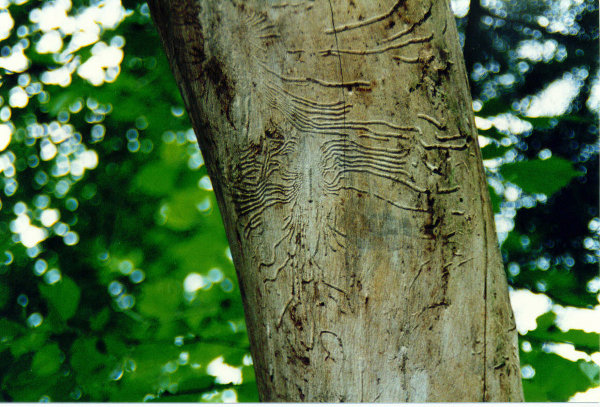 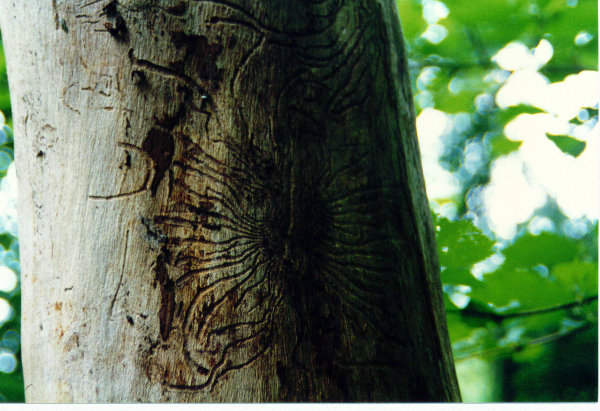 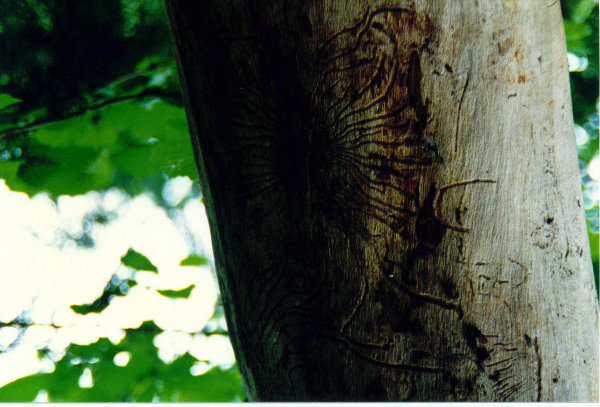 Below you can download or read the current infomation sheet and research infomation from the UK forestry commision, the inclusive photos show some fungus growth ‘compartmentalized’ off and also the ‘sheperds crook’ of early twig dieback.