In 1992 in the California hills of the Devils postpile National Monument during a storm on the 22nd of August a lighting strike started a fire, the fire became known as the Rainbow fire as it was started near the Rainbow water falls. Afternoon thunderstorms are not rare in July and August where the daytime temperature can range from the mid-70s to mid-80s (degrees fahrenheit).  At the same time the evening temperatures can drop into the low 40s Fahrenheit.

The Devils Postpile National Monument is located at 7,560 feet above sea level just west of the Sierra Nevada crest.  As such, it can experience Santa Ana winds which although predominately found in the autumn (fall) late august is also susceptible to these winds. When the fire was started by the lightning strike approx. six miles below the Devils postpile itself, the dry descending air from the higher Rockies was channeled down the gullies and valleys reaching 60mph, the wind fanned the fire like a bellows fans the flame of the furnace.

The wind caused the fire to spread to over 2,400 hectares in 24 hours, the fire continued to burn and by the 8th of September the fire had burned and destroyed over 3,300 hectares, including some 260 hectares of the trees in the monument area.

Conifer trees are particularly susceptible to forest fires as they contain volatile oils which the tree use’s as part of its anti-bacterial and anti-fungal defences, although in a normal ‘brush’ underwood fire the trees bark is sufficient to insulate the tree itself from the ground fires, and likely the pine trees will just suffer some lower limb scorching.

In fact many species of pine trees have evolved in areas where understory fires are the norm, the trees will take advantage of the high mineral nutrients left behind by the burned brushwood.  The tree seeds protected inside the temperature and fireproofed cones would open when the weather conditions were right and within several years tree seedlings would be sprouting. The ground leaf litter below and amongst the trees would also contain a seed bank as seeds have the ability to remain dormant but active for several years before been denigrated by the soil flora and fauna, it is known that some tree seeds can lie dormant for ten years or more, encased in a protective armour.

The Rainbow fire in parts reached such high temperatures fanned by the Santa Ana wind that it not only breached the fire resistant tree bark causing the trees to burn, but ground temperatures also reached unprecedented temperatures and the seeds that normally would have survived buried amongst several inches of leaf mould were destroyed.

The end result was that in a normal wood or forest fire nature would be showing signs of recovery within 2 or 3 years with tree seedlings sprouting amongst the cleared ground, taking advantage of the rich ash left behind by the brush wood burn. In many areas of the 3000 hectares this was the case, but in the areas where the Santa Ana wind was funneled and fanned the fire, the temperature was so high it sterilised areas totally free of life providing seeds.

Nearly 20 years later, there are still areas of the Rainbow falls and part of the Devils postpile monument still showing signs of this devastation.

The following photgraphs were taking in 2008: 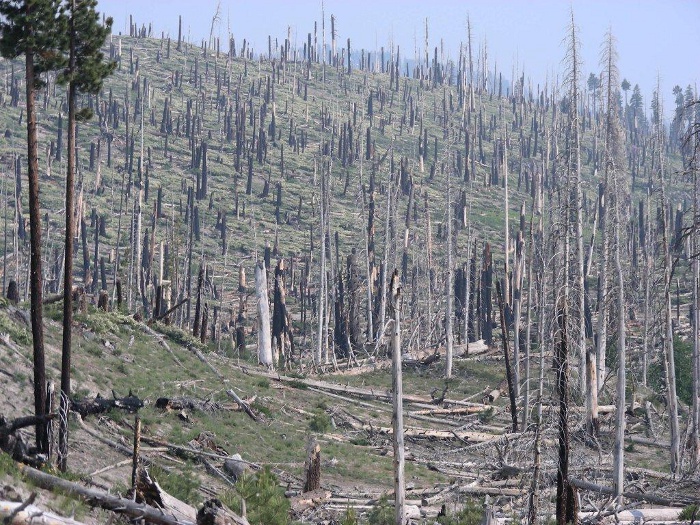 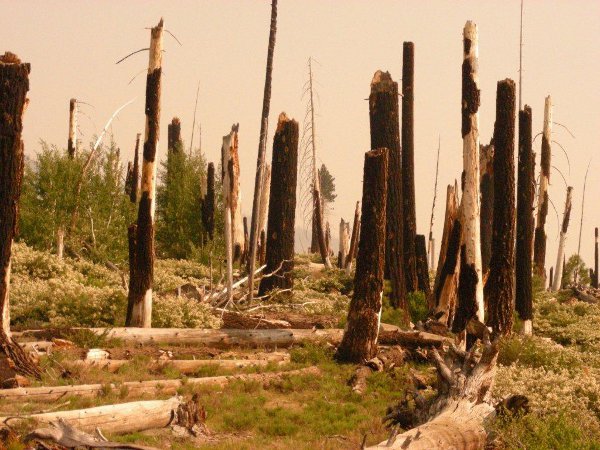 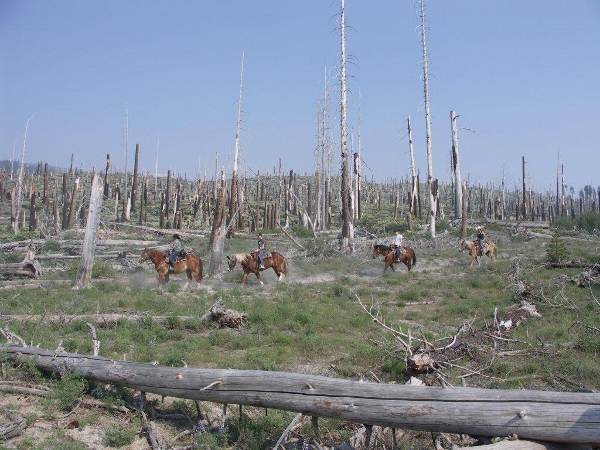 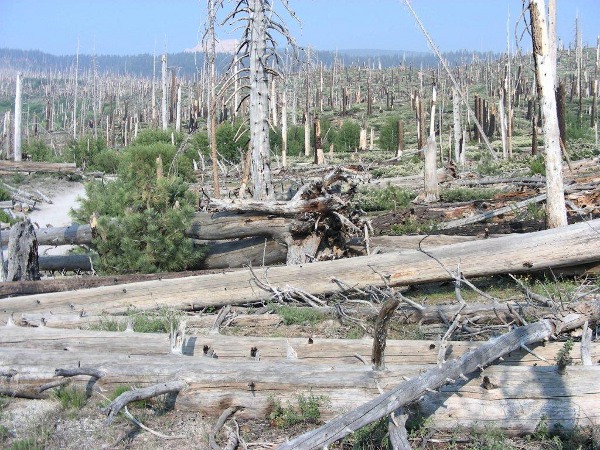 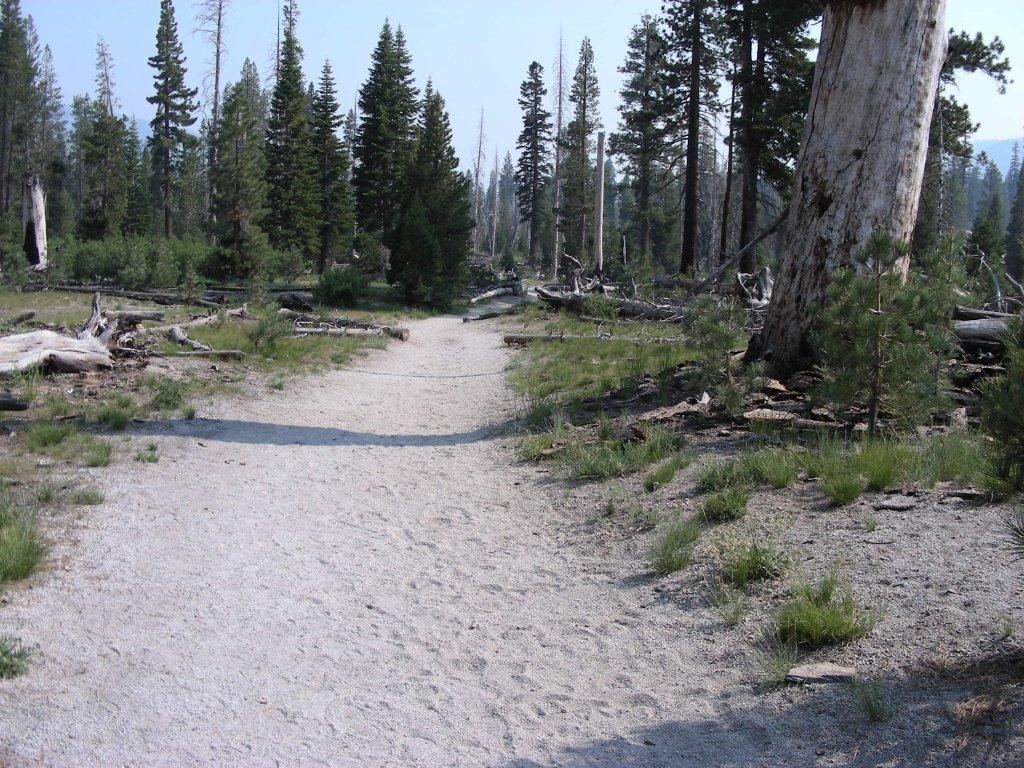 The following two photos show the marvel of the Devils postpile, which were formed when a huge amount of molton magma cooled slowly. 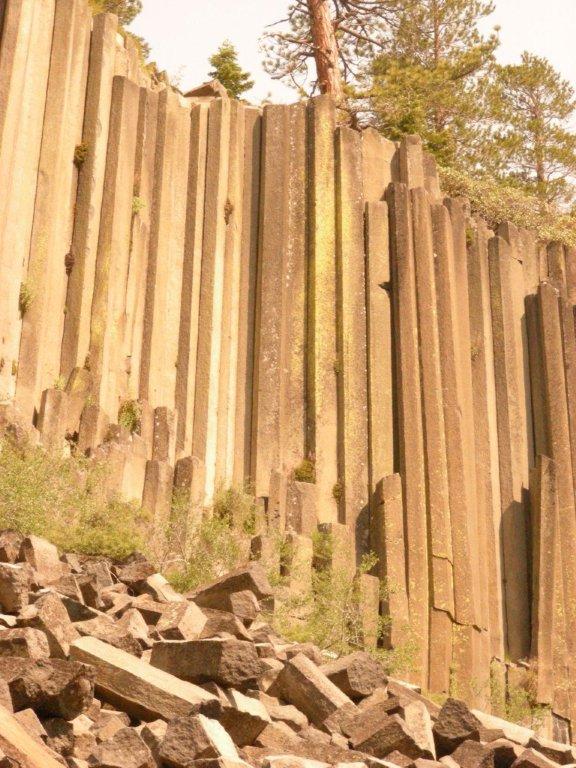 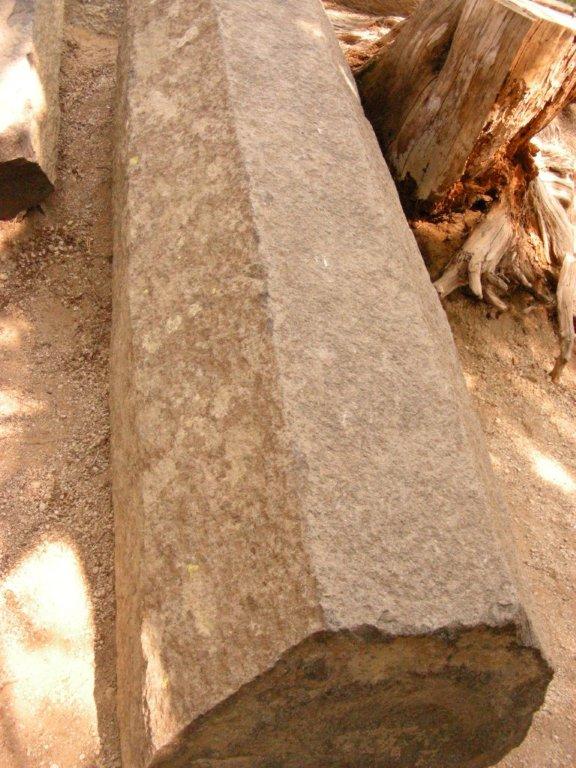